So, my class was discussing the Cold War, and I had some Soviet and Chinese propaganda posters projected on the screen. I read the captions*, we talked about the images, and were moving along rather quickly when:

The Voice From the Back of the Room: Miss Red, how do you know so many languages? END_OF_DOCUMENT_TOKEN_TO_BE_REPLACED

It depends. Are you a politician, a reformer, or a mortgage company?

What brought this strange question to mind was watching the ad for one of those on-line mortgage lenders. Which company I do not recall, but the gist of the ad was if you get or refinance a mortgage through them, you can buy more things for you and the new house, and thus you are helping the economy.

On the other hand, according to a few too many experts, reformers, and others I’ve heard and read over the past few years, we Americans and Westerners in general need to stop getting so much stuff and to stop desiring and creating more and better stuff. The world is too small for our desires, and we need to think of the underprivileged and impoverished. A smaller lifestyle is better for the world. END_OF_DOCUMENT_TOKEN_TO_BE_REPLACED

means your neighbor has buffalo grass. Or he’s planning to rip everything out and has sprayed it first. Because of the last four years of below-30-year-average rainfall and water restrictions, people around the Panhandle have begun replacing cool season grasses from humid climes with more heat and drought tolerant blends and native grasses. This is a good thing, in my opinion, but does give lawns a decidedly tawny look from December until April. END_OF_DOCUMENT_TOKEN_TO_BE_REPLACED

Tectonics and culture make for interesting, and uncomfortable, bedfellows. Especially earthquakes when the happen in places not used to them like, oh, Germany, or Austria, or the Mississippi River embayment. Most of my work focuses on more gradual things, like river erosion and aggradation (building up the bed), with a few volcanic tweaks tens of thousands to hundreds of thousands of years ago. When the earth moves in my work, it is because a river carried it away. But some places are more dramatic.

The ground does not just move of its own accord. Subsurface forces, generally channeled along weak places in the crust called faults, impart a twisting, or rising and falling, or sliding motion to the seemingly solid ground. They may go for hundreds or thousands of years without anything happening on the surface, until one day, snap, shake, rattle, roll. People have just discovered a new fault, the hard way. Because many faults are not visible at the surface, or are of a kind that is not blatantly obvious to the untrained eye. Like the New Madrid fault, which in theory is smack in the middle of the earthquake-proof “stable interior craton” as John McPhee put it. Or the Humbolt Fault, running through Nebraska and Kansas.

The New Madrid is the one under the Mississippi River Embayment. From: http://www.earth.northwestern.edu/people/seth/research/namrifts.jpg

Unlike California, the central states don’t have that many faults. But the one they do have is rather impressive . . . http://academic.emporia.edu/aberjame/student/johnson1/ES%20767%20draft%20page_clip_image001_0003.gif

END_OF_DOCUMENT_TOKEN_TO_BE_REPLACED

According to popular tradition and history, Spain under the Moors (or Arabs) between 711 and 1492 was a bastion of toleration, culture, and science in a wilderness of Christian ignorance and the Dark Ages. The Umayyad rulers of the various principalities of Muslim Spain protected the religious minorities under their control, allowing freedom of worship and living. Spain was where the wisdom of the Greeks, lost during the Dark Ages, was preserved by the Arabs and re-transmitted back to Europe. The Moors ignited flames of culture and beauty that led to the Alhambra and other works of enduring beauty and splendor, and rescued the backward natives of Iberia from the Dark Ages. It serves as a model for how the Peoples of the Book can and should live.

Only two people remember the manuscript tucked away in a back corner of the climate-controlled section of the Azdhag Imperial Archive. One is the archivist in charge of preservation of ancient manuscripts. The other is Rada Ni Drako. Hers is the next to last entry in the document, a bound list that goes back to almost five hundred year-turns before the Great Relocation. It is a list of Talon Oaths. END_OF_DOCUMENT_TOKEN_TO_BE_REPLACED

Sarah A. Chrisman Victorian Secrets: What a Corset Taught Me about the Past, Present, and Myself  Skyhorse Publishing (2013) Kindle Edition

Sarah Chrisman had worn historic and vintage (as in late 1800s) clothes for some time, as did her husband. But she refused to wear a corset. It was a sign of oppression, could break bones, caused health problems, deformed women’s bodies, and served as a tool of repression and the patriarchy. And then her husband got her one for her birthday, a lovely one in her favorite colors. And she did not want to hurt his feelings. And her whole view of fashion, style, and modern feminism got shifted along with her waistline. END_OF_DOCUMENT_TOKEN_TO_BE_REPLACED

OK, the pilots and military vets can stop giggling.

I was driving back from choir rehearsal Wednesday evening, just after sunset. There was enough light to see but not enough to see really well. I’d taken a secondary route home because of construction on Amarillo’s interstate junction is making an already interesting stretch downright exciting, and discretion is the better part of survival. So I’m tooling along one of the wider residential through streets not far from Redquarters and motion ahead and to my right catches my eye. It’s low to the ground, in a yard. END_OF_DOCUMENT_TOKEN_TO_BE_REPLACED

Listen my children and you shall hear
Of the midnight ride of Paul Revere,
On the eighteenth of April, in Seventy-five;
Hardly a man is now alive
Who remembers that famous day and year.

He said to his friend, “If the British march
By land or sea from the town to-night,
Hang a lantern aloft in the belfry arch
Of the North Church tower as a signal light,–
One if by land, and two if by sea;
And I on the opposite shore will be,
Ready to ride and spread the alarm
Through every Middlesex village and farm,
For the country folk to be up and to arm.”

Then he said “Good-night!” and with muffled oar
Silently rowed to the Charlestown shore,
Just as the moon rose over the bay,
Where swinging wide at her moorings lay
The Somerset, British man-of-war;
A phantom ship, with each mast and spar
Across the moon like a prison bar,
And a huge black hulk, that was magnified
By its own reflection in the tide. END_OF_DOCUMENT_TOKEN_TO_BE_REPLACED

Wouldn’t it be fantastic if eating biscuits and gravy made you skinny? 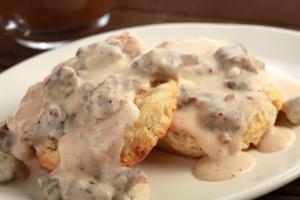 What’s actually on the morning menu (minus the orange.) https://blissfulhope.files.wordpress.com/2012/01/img_6623.jpg