means your neighbor has buffalo grass. Or he’s planning to rip everything out and has sprayed it first. Because of the last four years of below-30-year-average rainfall and water restrictions, people around the Panhandle have begun replacing cool season grasses from humid climes with more heat and drought tolerant blends and native grasses. This is a good thing, in my opinion, but does give lawns a decidedly tawny look from December until April.

OK, I think this is just silly . . . https://ucverdebuffalograss.com/wp-content/gallery/ucverde/dormant.jpg

You see, buffalo grass (Bouteloua dactyloides) goes dormant in winter. It is a warm-season grass, as are the vast majority of native bunch grasses and short grasses of the North American steppe. Buffalo grass grows from April until December, then goes dormant and loses its color, returning in later spring. I prefer it unmowed, when it gets up to a foot high with lovely seed heads, but suburban neighbors tend to get a little suspicious that you are lazy and using your native lawn as an excuse not to mow. And there is that little snake problem . . . 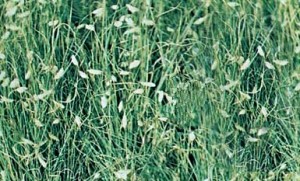 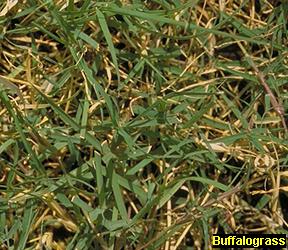 Greening up in spring. http://www.ipm.ucdavis.edu/TOOLS/TURF/IMAGES/KEYIMAGES/buffalo.jpg

Buffalo grass tends to be finer than bluegrass or fescue, and harder to start. There are now a number of sub-types now available for home use that grow more quickly than the original. You can get it as seed or plugs. It is not a turf grass, and I do not know of any buffalo grass sod currently available, at least not down here. I suspect some will be developed soon.

A nice native lawn, with house cat for scale. http://3.bp.blogspot.com/-twQWyBz8t_E/UCPo79ENqaI/AAAAAAAAAcw/q7zzWIEwPBA/s640/buffalo+grass+1.jpg

The neighbors on both sides have Bermuda, leading to annual battles to keep the Bermuda out of the Redquarters lawn. Bermuda is a nice warm season grass, but it tillers (grows through runners) and looks tacky mixed into other things. The fescue is not as water-thrifty as buffalo, but it stays green in winter (Mom Red likes a grass-colored lawn), stops growing in the height of summer (less mowing), and is relatively more traffic resistant than buffalo (at least until buffalo gets settled in well). You know, what is the one thing that grows by the yard and dies by the foot? A lawn.

Sorry. As I was saying, fescue is a compromise, and we have a special blend that was developed for this region. It gets mowed long, so the roots remain shaded and cooler, helping it cope with August’s heat. Fescue is not a true warm-season grass, but it there are hybrids that are much more heat tolerant than Kentucky blue grass and other more common lawn turfs. Planting Kentucky blue grass down here is just mean. The poor plants never have a prayer, and they drink more water than a marathon runner in Death Valley or a cyclist in the Hotter-than-Hell-100 (TM).

There are a few brave souls in the older suburbs who have true native grass lawns, including one not too far from Redquarters that has gramas as well as buffalo grass. I suspect the owner went to a rancher friend, dug plugs and sods, brought them back, and used that for the lawn, bringing gramas and other natives with it. He lets the grasses seed, and I enjoy seeing the happy, slightly scruffy plants every summer. He seems to water a touch more than some buffalo grass lawns around here, but far less than cool-season lawns.

For a lawn in the High Plains, you really need a drought-resistant, heat tolerant grass that you water well but only two or three times a week at most (so the roots develop) and mow long (so the roots develop), preferably with a mulching mower so you recycle the biomass and don’t have to fertilize or add topsoil too often. Feed it once or twice a year, kill any dandelions with extreme prejudice, and use nematodes every few years to keep the grubs at bay. It won’t look like the greens at Augusta National, but it will be a healthy, relatively lush bit of green that requires minimal care after it gets settled in. Or brown, if you have buffalo grass in December.