In Familiar Roads, Rodney and Tay get into a mildly warm discussion about whether North American in general and the Southwest in particular can have geni loci, spirits bound to a place, or at least magical things that act as if they are spirits bound to a place. Part of what inspired that little scene was remembering a fragment of Mary Austin’s poem, “Southwest Magic.”

There are no fairy-folk in our Southwest,

The cactus spines would tear their ﬁlmy wings,

There’s no dew anywhere for them to drink

And no green grass to make them fairy rings. END_OF_DOCUMENT_TOKEN_TO_BE_REPLACED 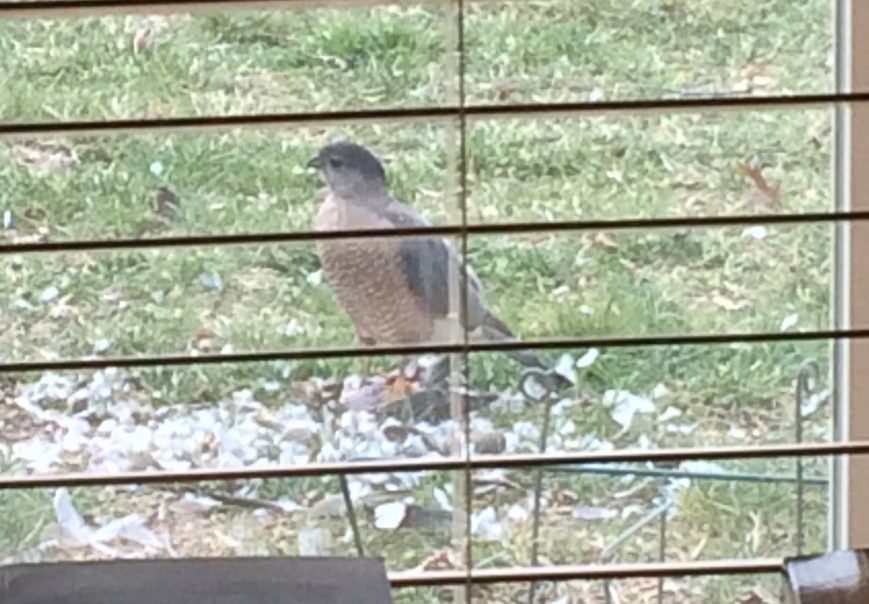 The dove has experienced the Raptor. It is either a sharp-shinned hawk, or a Cooper’s hawk. The two are almost identical, other than the shape of the feathers on their heads.

We have three bird feeders, and the doves scavenge off what the smaller birds scatter. Every so often, a hawk “hunts over bait,” as Dorothy G phrased it. The bird books say to take down the feeders when that happens, so the hawk won’t hang around. As many doves and grackles and starlings as we have? Nah!

You never know with sunsets. The ones that look as if they might turn into magic fade into grey and darkness with nary a hint of color, and the nights you think it’s not worth opening the blinds? Crimson and gold seep in through the gaps, taunting you for your forecasting folly.

So I set out with mild hopes and the need for exercise. After some indecision, I headed west, in part so I would have the wind at my back on the way home, once it started really getting chilly. The dew-point/frost-point was in the teens Fahrenheit. When the sun disappeared, so would any heat in the air. I could smell wood smoke, and whatever the icky, heavy and black smelling stuff they’re burning three houses up, one over. It felt good to stretch my legs, and the chill in the air faded as I picked up the pace. END_OF_DOCUMENT_TOKEN_TO_BE_REPLACED

I grew up with sea stories. Dad sailed as a child and teen, and was in the Navy. I memorized sea chanteys as a child, and literally cut my teeth on a model of the Bismark (Dad wasn’t pleased.) One of my favorite books growing up was H. C. Holling’s Sea Bird, about the seas, sailing, and advances in nautical technology. Some time ago, Dad mused that perhaps if we’d lived closer to the sea, I’d have become a master mariner instead of a pilot. Who’s to say? END_OF_DOCUMENT_TOKEN_TO_BE_REPLACED

As I mentioned earlier this week, we do have written sources for climate that can serve as proxy data, as well as sources that are hard data. The first time anyone really took advantage of these was in the early 20th century, when a French professor looked at his grad students and started handing out the names of regions and departments. Then he commanded, “Go ye into the archives and dissertate upon what thou findest.” Thus was born Emmanuel Le Roy Ladurie’s Times of Feast, Times of Famine, and other works.

As with scientific data, archival data has to be used carefully and with large grains (entire mines’ full) of salt at times. What exactly did a monastic chronicler in AD 1312 CE mean by “terrible storms, worse than seen in this lifetime?” Better are things like ” . . . and ten houses of the village of Dunwich washed away, and twenty souls were lost.” When combined with archaeology, we can sort out what happened. Add more coastal villages disappearing, and it is safe to say that an unusually stormy period with strong easterly winds dominated the area for several years. END_OF_DOCUMENT_TOKEN_TO_BE_REPLACED

How do we know what the weather was like “back then?” We don’t.

We can get some good ideas about climate, however, so long as we acknowledge that our data and ideas may be flawed and subject to change as we learn more. The sources we use to track long term weather patterns (aka climate) fall into two very broad categories, and there is some overlap. Those categories are direct data, and proxy data.

Direct data are what we can and have measured using modern instrumentation (for the then-present definition of modern). Numeric temperature, barometric pressure, snowfall and rainfall totals, sunspot counts, those are direct data. END_OF_DOCUMENT_TOKEN_TO_BE_REPLACED

The combination of sheets of high clouds from storm systems that miss the Panhandle, plus the southerly track of the sun, have combined to give us amazing sunrises this past week. They incline towards crimson and gold, with splashes of pink in the opposite sky.

The storm tracks have been south of this area, or north. As a result, the moisture and lower clouds remained far away. However, the ice clouds that trail along the sides of the storm track have been a near-constant presence, some days thickening until they form a sheer, milky cover that mutes the afternoon sun and swallows any sunset. END_OF_DOCUMENT_TOKEN_TO_BE_REPLACED