The short story for the next Tales Around the Supper Table anthology is done. I’m going to give it another once-over, now that it has “rested,” and send it off to the editor. That collection should be *taps wood* out later this fall.

I got the draft of White Gold and Empire done last weekend. It needs major revision before it goes to the alpha readers, mostly to get the “voice” unified across the book. Keep in mind, I started it in the fall of ’19, then set it aside, so it needs to be smoothed out, and one big plot thread tucked away.

I have the plot for another Merchant book sketched out. I’m going to work on it for NaNoWriMo (November). The tentative title is City, Priest, and Empire, and it is set at the end of the Great Cold. It appears that I can’t really do a good Merchant world book unless I am immersed in Central Europe stuff, either being there or doing a lot of heavy research for something else. *shrug* #WriterWorldProblems

The stories for Familiar Paths are well underway, and I hope to have those done by the end of October, for a December release.

I know how the next Elect story will go, it is a matter of clearing space in my head to work on it, now that the reference book I needed has arrived. The main character is Paulus, and the female lead doesn’t have a name yet. She’s an environmental science major with more Grand Plans than sense, at least until reality, ahem, bites.

Day Job is rather calm for the moment this term, as usually happens. Spring is when things tend to go rodeo.

I discovered that I have to add a story to Nominally Familiar in order to fill a time gap and set up some things for the future. So expect the book in August, if all goes well.

I will resume work on White Gold and Empire as soon as I finish the short story.

After that? I will have a short story in an anthology tentatively slated for an autumn release. Then it depends on what Day Job looks like. I don’t know for 100% certain how many classes I will have, what my schedule will be, or how many students I have (yet). One of the classes will be brand new, and those always take more work than something I’ve taught before.

If Day Job is full, then the next thing will be a Familiars book, then probably a second Familiars book or Elect novella. If Day Job isn’t too overwhelming, I may take on the novella first, for an autumn release, then Familiars, then maybe that Indus Valley thing. I’ve already got the next Elect story sketched out. Paulus and an as-yet unnamed lady are the PoV characters. After that will come a story from Magda’s PoV.

As it stands at the moment, there will be three André-Lelia stories in N- Familiar, the one about Morgana, one about Ned Oescher (the jeweler), one Rosie and Mallory, and Sharrie’s story. I’ve already started pulling some of the story excerpts off the blog, so if you have been looking for something and can’t find it, don’t worry. You’re not losing your mind.

This short story collection contains a variety of Familiar stories, now in print. At the moment it is Amazon only, in order to keep the cost as low as possible for readers.

Dark magic, darker geology (or at least uncooperative rocks), a old wolf, and a Texan.

Empires came and went, but little seemed to change until an oil-field survey crew from Houston arrives on the Polish-Ukranian-Slovak border. The Galician oil fields had played out . . . or had they? And what brooded from the top of the mountain that wasn’t there (per GPS)?

I’m working through edits on “Wolf of the World.” If all goes well, it should be available early next week.

I’ve gotten more written on White Gold, the next Merchant book. My goal is to finish the draft by the end of the month, if not sooner.

I’m also working on some Familiars stories for the next book, or at least making notes of ideas so that when I get things settled down, I can write them.

My other summer goal is to write the book based on the Indo-European arrival in the Indus Valley, the one I sketched out over at MadGeniusClub last year.

Day Job will have expanded duties next year, at least in the first semester, so I’m going to try to get a lot of writing done over the summer. Yes, I do have a vacation planned. No, I’m not leaving the US this year. Maybe, maybe, perhaps, in 2022, but I’m not holding my breath. Too much depends on bureaucrats in three other countries, none of whom seem to be afflicted by sanity at the moment.

Evil is moving. But mages (and a sorcerer of uncertain years) just might move faster.

I spent nine hours or so working on edits for Malevolently Familiar yesterday. Full post tomorrow.

Update 1540 CDT. The book has been uploaded to Amazon and should be available by Monday.

I am in the process of edits and corrections for the book, and will be needing outside readers later this week.

Wolf of the World should be done next week, the draft at least. It will be a novella.

I got ambushed by a dark fantasy story this weekend. We’ll see how it goes. I want to get the Merchant book done before tackling anything else.

For those worried about Book 18 being the end of the Familiars, no. It is the end of a major plot arc. The series will continue. 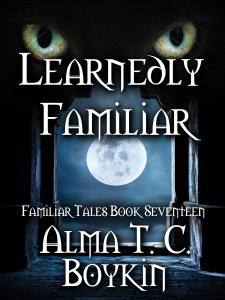 And gates where no gate should be.

Learnedly Familiar is in the process of being formatted and uploaded. It should be available this weekend or Monday.