This is a re-post from 2017. I’ll have a follow up this weekend, since flooding in China has been worse than usual, with some very concerning reports about the structure of the Three Gorges Dam.

One of the assumptions, or perhaps tropes is a better word, of certain parts of the environmental movement is that only Western countries, or only capitalist economic systems, cause environmental degradation. Or they might stretch it to argue that only countries that have experienced the Industrial Revolution destroy their physical and biological environments, because it takes steel and machines to really ruin the landscape. This idea comes in part from where the modern environmental movement originated, in part because of lingering fumes of the “noble savage” idea, and in part because English, French, German, and Spanish-language sources are a lot more common and easier to work with for most researchers. However, in the past 15 years or so, people have been looking outside the European sphere-of-influence, and digging into archaeological and geographic information to show that no, humans have been “degrading” their environment for a very long time.

One of the things people assumed about China was that because Chinese culture and civilization have been around for so very long, and seem unchanged, that humans might have found a way to live “in balance” with their environment. Certainly a superficial glance at the teachings of Confucius and Daoism, as well as Buddhism, suggests that “Asian wisdom” encouraged living within the constraints of the land’s resources. Except. Humans are human. And humans use the land, expand, develop new technologies, and deforest and break sod everywhere we are found. So let us go north, to what is now called the Yellow River, and step back in time to AD 100 or so CE.

The Yellow River in northern China. Where China really began. 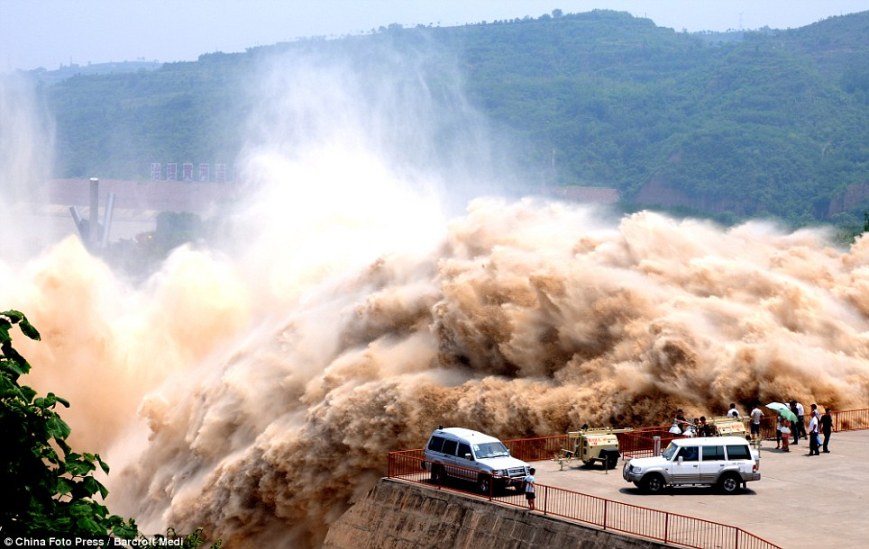 Look at all that topsoil, headed for the sea.

Han Chinese culture originally developed in northern China, in the watershed of the Yellow River. Originally it was a place with dense riparian forests, rich soil, and bordered in the north by steppe grasslands and to the far west by the beginnings of deserts and the mountains of Central Asia. There were tigers, rhinos, elephants, and other wildlife, and the people called the river “the Great River.” And it ran clear. The central Loess Plateau had a more humid climate and was forested, with far less erosion than today, and the soil stayed put. The grasslands to the north were lusher as well. This was roughly 3000 years ago, in the Shang/early Zhou Dynasties. 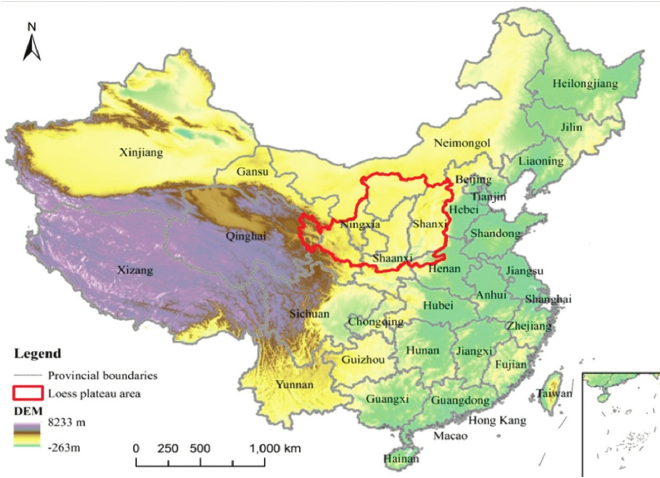 During the Qin and Han Dynasties (221 BC/BCE-AD/CE 220), ethnic Han began moving into the valley in greater and greater numbers, clearing the forests for farming. Nomads from the north contested ownership of the region, and fighting followed, with periods of mild truces and economic exchange alternating with raids and battles. The Chinese Emperors sent soldiers into the region, along with forced laborers to build and then extend and maintain the Great Wall. All these people needed food, their horses and oxen needed forage, and the forests were cleared. At the same time, the regional climate became drier. The combination led to increased erosion as more land was left bare to the wind and rain. 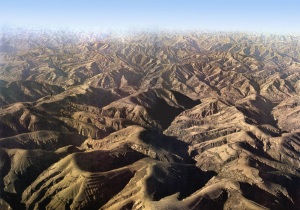 The results of 3000 years of deforestation on light soil.

Loess (“luss”) is a light, easy-to-work and dusty soil. It is what glaciers leave behind, and can form steep hills as well as rick farmlands. In the US, to see loess, visit the Loess Hills along the Missouri River in Iowa. Loess is great for growing crops, but it does tend to travel if farmers are not careful. Grazing can cause problems if overdone, but farming often causes far greater erosion and soil loss, because it turns over the soil and exposes it to wind and water. This started happening on the Loess Plateau around AD 200 or so. By the 700s, people were having trouble with tributaries of the Great River silting up and causing local flooding. All was not well, but no one knew why because they couldn’t know why. The population was booming, the barbarians were held at bay and things seemed OK, except for the silt and flood problem.

And it got still drier. Drought began affecting the Loess Plateau more and more often, withering crops and the remaining grasses. Sandstorms became more common. When it did rain, the water ran off instead of soaking in, and it carried sand and soil with it, carving gullies. People hundreds of kilometers downstream saw the sandstorms and dust, and watched the river change color, and wondered what was happening. They couldn’t know.

As the silt traveled downstream, some of it settled out and raised the river bed. This made flooding more likely, and worse when it happened. So people built little dikes to keep the river contained. And more dikes, and the river rise, and the dikes rose, and the river rose, and the dikes rose, and . . . when the dikes broke, the flooding was far, far worse than ever before. In 132 BC, a dike break flooded enormous swaths of Hebei and Henan provinces. The hole was not fixed for over 20 years. This is long before free-market economics, or the Industrial Revolution, long before the population of China grew to anything near what it is today.

People adapted and lived with the river until AD/CE 1048. The Yellow River moved, literally overnight, changing course by tens of kilometers and flooding enormous swaths of land after rains upstream filled the river to overflowing. Silt and sand covered huge swaths of the flat farmland, killing tens of thousands of people and displacing even more. Ten meters of silt and sand were eventually deposited over the space of 90 years. As the scale of the disaster became apparent, the Song Dynasty attempted to repair the dikes, but they couldn’t get things fixed fast enough before another flood and the river moved again, and again, and again.  The defensive network of ponds and stream diversion built to keep the horse-nomads from invading also exacerbated the problem. The century of catastrophe so weakened the Song Dynasty that it lost northern China to steppe nomads, entering the period of the Southern Song. The river eventually swung south again, in the early 1100s, but the damage had been done. The dynasty staggered along until the Mongols finished it off.

The Mongols considered grasslands a gift of their gods, and viewed breaking and plowing the land as near sacrilege. They ran the Han and other farmers off the loess plains and Loess Plateau, insisting that the grassland be allowed to return to grass, as was right and proper in their view. The grassland did recover some, but the riparian forests had lost too much and never came back. The tigers, rhinos, and elephants were long gone, banished to far southern China, for the moment. Eventually they would disappear entirely. The Mongols managed to keep the Han out of the grasslands for almost 200 years, before they were chased out by the Ming Dynasty (1368). When the Ming took power, the farmers returned. As did dust storms, and massive erosion, and the desert crept farther and farther east.

Conservation is not the natural state of human behavior. And people didn’t know what they didn’t know. Were there, in some parts of China, agricultural and economic systems that worked and that were stable over time? Yes, the silk-carp system in southern China, which could be maintained for centuries so long as someone else had enough surplus food to sell to the silk growers. But the story of China is the story of humans pushing out, always needing more land and resources, until they hit hard environmental limits in the 1600s. And then the climate shift of 1590-1650 and dynastic turnover (Ming – Qing [Manchu]) so slashed the population that it was not until the 1800s that China had space problems again.

People didn’t know what they didn’t know. We can look at the salinization of soil in Mesopotamia, the deforestation of the Mississippi River Valley during the Mound Builder culture (1000-1400 more or less), the deforestation of the Yellow River valley and the desertification of the Loess Plateau, the deforestation of the Andes… Conservation is a luxury in many ways. Wise use is learned the hard way, and wise use for the Song Chinese was not exactly what modern conservationists would call wise use. But you do not need a free-market economic system or liberal democracy or heavy machinery to undo an ecosystem and replace it with something different. Humans do that just fine, one cleared field at a time. 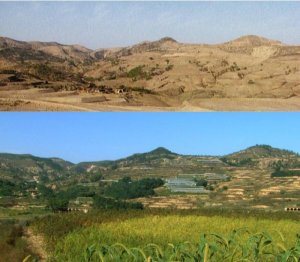 Modern restoration attempts. You must hold the soil down.

Marks, Robert B. China: An Environmental History (New York: Rowman and Littlefield Publishers, 2016)  I highly recommend this book. The other one is an academic monograph that is very useful for specialists, but Marks’s book is aimed at the interested lay-reader, so to speak. You should have a good overall idea of general Chinese chronology before reading it, though, or be willing to look up dates and dynasties if you get muddled.