More Ketchup and Mustard. If only it had scent…

So, in lieu of actual content, because my brain is mush due to allergies, end-of-term work, and pre-loading two blogs for June, you get more flower photos today. Sorry.

I was poking around my favorite local native-plant and xeriscape nursery, and discovered this thing. The lady said they’d ordered it by mistake, because it’s a tropical version and won’t over-winter. I got it anyway, just because it is so odd. It’s a butterfly-bush, also known as buddleia. 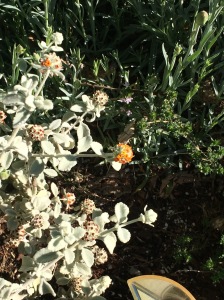 This makes two “odd” buddleia that grace RedQuarters. The other, a huge spring-flowering, left the visiting landscaper slack-jawed. He’d never seen such a thing, and was frantically taking notes about all our plants for his boss. In addition to measuring for two new flowerbeds. We have two that are literally falling apart at the seams, and they need to be replaced before we have a plant-va-lanche. 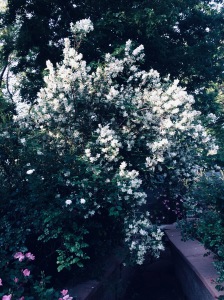 Mock orange. Its over seven feet tall and perfumes the entire yard.

The mock orange was another thing that had the landscaper staring in disbelief. You can’t see it, but there are two roses blooming inside this behemoth.

And for something slightly different. Remember that post about the different bees? 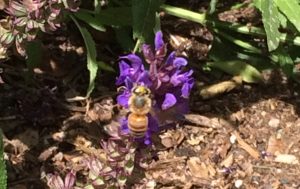 Now, fair warning. The next shot is 1) 20+ years in the making, 2) in a really, really unusually good spring, 3) after the flowerbeds have been tidied and trimmed, 4) on a cool day. If your yard doesn’t look like this, don’t sweat it. I can’t think of many places here in town that look like this.

Pulling back and shooting down half the length of the bed.

That’s the second Ketchup and Mustard, salvia, and more roses.

There’s a yucca hiding in there, and moss roses making an escape break by the rain gauge. You can’t see the snap-dragons, coreopsis, or gallardia, either. Again, twenty plus years of trial, error, composting, and grumbling about “why’d it die? It looked just fine yesterday, before the sirocco turned everything to plant-jerky.”

For those wondering, we water (if we have to) half an inch a week, and hand water with extra from cisterns if needed. It’s about time to add more mulch, to keep things cool and moist as we hit the hot time of the year.