St. Anthony Abbot, St. Florian, St. Elmo. They are all associated with “fire,” although only one is usually depicted as dealing with flames per se. That would be St. Florian, an Austrian martyr saint who is the patron of fire-fighters. A saint with a bucket dousing is building is St. Florian. He’s usually wearing Roman armor.

Patron of Firefighters, at least in Europe.

According to tradition, St. Florian (May 4) was a Roman soldier who was martyred during the reign of Diocletian by being thrown into a river with a mill-stone around his neck. He’s popular in Austria and central Europe. His primary abbey  near Linz is amazing (and Prinz Eugen von Savoy was a major financial patron, so there’s a most impressive painting of his battles in the ceiling of one of the public rooms.)

St. Elmo, or St. Erasmus (June 3) is another man who was martyred under Diocletian, a decade or so before Florian, and in Italy proper. He is shown with a winch or wool winder, and is one of the patrons of sailors, along with St. Nicholas and Nuestra Senora Stella Mare (our Lady Star of the Sea). However, most people know him for “St. Elmo’s fire,” the static and lightning that gathers on the masts and spars of ships, or the wings and propeller tips of aircraft. OK, some of us of a certain age also know of the movie. St. Elmo’s fire was considered a good sign. 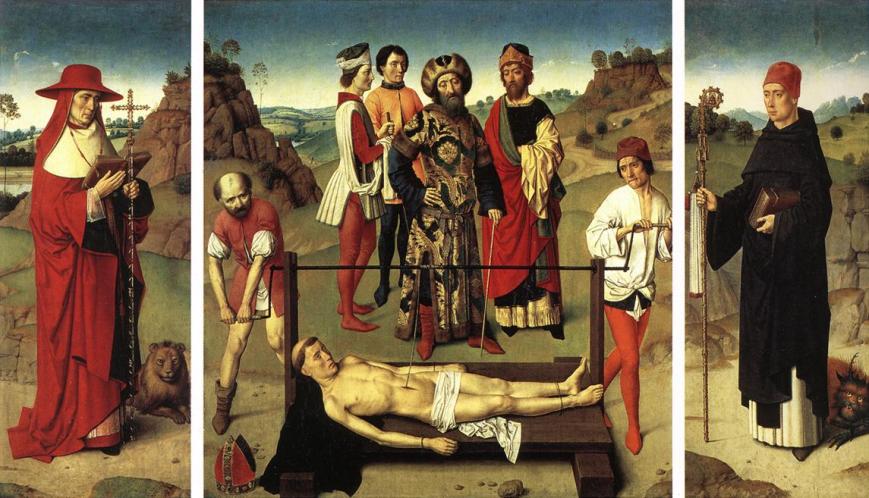 The Martyrdom of St. Elmo (Erasmus) Tryptich by Dierk Bouts, a Northern Renaissance Master. The others are St. Jerome (with lion) and St. Bernard.

St. Anthony Abbot (or St. Anthony the Great) (Jan 17) fled to the wilderness, where he was tempted and tormented by the devil, sometimes in the shape of voluptuous women, sometimes in the form of demons. Other monks came to him for guidance and spiritual advice, and eventually formed a monastery, even though he preferred to be a solitary desert hermit. Most art shows him with the demons, and often with a striped pig (the Anthony, or Tantony pig). Because of the graphic accounts of his visions of demons, he became the patron of people suffering from ergotism, or St. Anthony’s Fire. Along with hallucinations, ergot poisoning causes burning sensations in the hands and feet, so some art depicts people with flaming feet asking for him to intercede for them.

The Temptation of St. Anthony from the Isenheim Altarpiece by Matthias Gruenewald, Colmar, France. The original is slightly larger than life-sized.

And just because I used to play this a lot on the piano:

8 thoughts on “Saints a’ Fire”