Ah, spring, when an evening stroller’s thoughts turn to duck!

Ahem, to avoiding the local wildlife, especially when that wildlife is re-enacting dog-fights straight out of Battle of Britain and Top Gun. END_OF_DOCUMENT_TOKEN_TO_BE_REPLACED

The Eighteenth of April in ’75… William W. Longfellow wrote a series of poems called “Tales from a Wayside-Inn” a bit like the Decameron without the naughty-stories. Most of the poems are forgotten, but one has endured… END_OF_DOCUMENT_TOKEN_TO_BE_REPLACED

There’s a wonderful German term, Treppenwitze, which means the great retort, comment, or joke that you came up with… as you left the party and went down the stairs (die Treppe). I’m a master of that art. But every so often, my wits work on time.

I was standing in line at a fancy buffet dinner, one of those where they carve slices off a roast beast as you watch. The carver had finished with one slab-o-meat and was waiting for another to arrive, and so his carving board was bare.

Alma: Oh! [smiles with excitement, points to empty carving board] Is that the roasted unicorn loin?

Carver: [split second of hesitation, roar of laughter] Yes, Ma’am, it most certainly is.

I’m certain that exchange had nothing to do with the thick slice of roast with extra juice that appeared on my plate a few moments later.

As I was purchasing a copy of something else (a history of battlefield archaeology in Germany that was too heavy [literally] to buy over there), Amazon.de’s alsobot turned up a book entitled (in German) 15,000 Years of Murder and Deathblows. It’s great! It is a popular science book in the best sense, taking some very complicated science and using it to tell fascinating stories of mayhem, murder, and puzzle-solving. END_OF_DOCUMENT_TOKEN_TO_BE_REPLACED

I had bought the first one, finally got around to reading it, and devoured the other two that same week. Curse you! *shakes paw* And the fourth one is with the beta readers and not out yet. *shakes paw again* Um, yeah, I like them. Aside from the little problem that they caused me to have adrenaline dumps because I got pulled so hard into the books, but that’s not a normal reaction. END_OF_DOCUMENT_TOKEN_TO_BE_REPLACED

This month has two of the hardest classroom lessons for me to teach. One is the Hungarian Revolution of 1956. The other is 1989. There are a few times per year when I am at risk of losing it and crying while I teach, and these are two of those days. Why? Because I know people who were involved, and because I’ve been there, walked the streets, followed events on foot even though it was after the fact. END_OF_DOCUMENT_TOKEN_TO_BE_REPLACED

The first time I tried to change an empty water bottle, it attacked me. END_OF_DOCUMENT_TOKEN_TO_BE_REPLACED 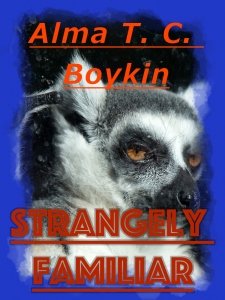 How many lint-rollers does a goth with a lemur Familiar need? More!

Neither Officer Jamie Macbeth nor Lelia Chan wanted Familiars. Too bad. Because they need them when magic-workers and their relatives begin dying of most unnatural causes.

Lelia’s got problems. Tay just might be the answer. If they can live long enough to learn to work together.

I hadn’t thought about it for decades, until I was text-chatting with Dorothy Grant and the memory bubbled up.

I had just left the Germany Army Research Bureau offices in Freiburg. I’d gone to introduce myself and see about trying to get research space, and had been informed that sooner was better. As a result, I changed plans and instead of hurrying back to campus that afternoon, I was hunting for a hotel for the next week. Boykin’s Law and all that.

I had not been to Freiburg im Breisgau before. I had a small map and two addresses of possible stay-places. In my meanderings, I’d wandered off the main tourist path and was in a rather odd neighborhood of house-hotels, an old palace-looking building, and something stone, imposing, and almost fortified. I stopped to get my bearings. The warm spring sun and lovely flowers softened the street scene. The fancy place on the other side of the street had a waist-high wrought-iron fence with a neatly trimmed hedge behind it. I stood with my back to the semi-fortified place, map in hand, trying to sort out where ‘here’ was and which direction I needed to go. And I heard shouting, not happy shouting. END_OF_DOCUMENT_TOKEN_TO_BE_REPLACED

Last week, Peter Grant inquired why the western Great Plains (the High Plains) are so dry compared to the eastern and southeastern parts of the Great Plains. The short answer is bad geographic luck. The longer answer has to do with two mountain ranges and the Mississippi Embayment.

Dry and/or lumpy – must be the American West.