On the trip this past summer, my group opted to go out onto an island to look at the Baltic. The island is rather large, and protects the city from the Baltic’s infamous winter storms. However, that day all was well, and we hoped that since tourist season had not officially started, things would be pretty quiet. 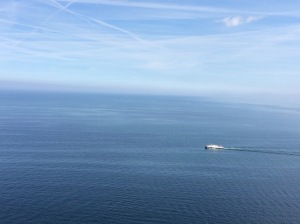 So peaceful, and quiet. It was about 75 degrees F, with a light breeze to keep the bugs away.

The island of Rugen, where we went, is a lumpy chunk of north Germany, rockier and with more variety of scenery than the mainland. We passed freshwater marshes, forests, nice farms, and lots of cars. Apparently we were not the only people trying to get ahead of the rush.

So we reached our destination, a famous overlook of the Baltic where you can go right to the edge of the sea cliffs and look out into the sea. The driver, who had recommended the place, was a little taken aback that we now had to part a kilometer away and pay for a bus ticket to the overlook. He’d last been there in 2002, and things do change. Having restrooms was a positive change, and since no one in the group but me wanted to hike over the hill and past forest bog to reach the overlook, we took the bus.

A little back story, which we discovered only when we got to the now-imposing building blocking the trail to the overlook. In 2003, serious storms hit that part of the Baltic and a chunk of the sea cliff fell in, as they are wot to do in major storms. UNESCO and the World Wildlife Federation jointly with the German government built an imposing visitors’ center and overlook the next year, well back from the cliff. And charge admission. And, based on the signs advertising the visitors’ center at the bus stop in front of the building, advocate about anthropogenic climate change, complain about too many humans despoiling the environment, and that sort of thing. It now costs four Euro fifty to go look at the cliff.

Since several school busses had just debouched over a hundred students, my group poked around outside and decided that we had no desire to fight the crowd. And someone noticed a little trail disappearing into the woods. Lovely, cool, beech woods. The trail led toward a steep climb that seemed to end in a cliff…

And so into the woods we went, scrambled a little on the steep dirt trail, and were rewarded with nice views. They were not as famous as the one from the top of the main cliff, but not as crowded, either, and free. And no one preached at us, aside from the sign saying that a trail to the water was now closed since the Baltic had eaten large chunks of it. That sort of sermon I’ll listen to.

What was fascinating was the reaction the instant we saw the WWF panda and UNESCO logo – a groan of dismay. Because bureaucrats never, ever improve things, at least as far as the UNESCO sites I’ve encountered. At best they leave things alone and insist that others do as well, making restoration and needed renovations a challenge. At worst they impose rules, restrictions, and a world view onto the site, all of which take the pleasure away from just roaming around and looking.

I can sympathize with not wanting people too close to the cliff. The Cliffs of Mohr in Ireland are famous for those who jumped or fell off, in part because there’s not a prayer of rescue, and often times the body can’t be recovered due to the danger at sea. And in the age of selfie-induced-stupidity, no one wants to have to be the one to notify the family that someone took the plunge, or to deal with the witnesses of said plunge. Although I do have a streak of “Darwin Award Winner!” in me that thinks if you back off a cliff despite the signs, especially if you climb over a fence to do so, you deserve your fate.

However, charging a fee and requiring people to march through a building with displays about how humans are messing up the planet in order to get to a viewing site well back from the view… I’m not so pleased. Why not move the view site back, put up a few signs about the geology and biology, and leave well enough alone otherwise? The chalk cliffs visitors’ center could be elsewhere, like the meadow on top of the hill where we had to park to catch the bus. Or closer to one of the towns on Rugen, just outside of the park.

And I try to keep in mind that the EU funds tourism and culture, not industrial development or anything that might compete with French and German industries (in general. There are exceptions.)

But no one asks me, and I’m not German.

For the web-site of the center which is available in English as well as German: