Some people believe that places where events of great emotional or spiritual power occurred are forever marked by those events. I’m not certain that I entirely believe all the claims, because I’ve crossed paths with a few too many New Age wanna-be psychic nuts and flakes over the years. However, go walk the battlefield at Kalkreise on a dark, rainy day. There’s something creepy there. 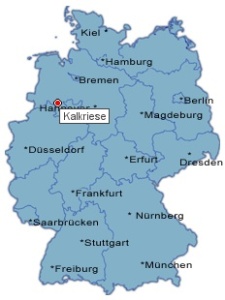 The Kalkreise is a steep hill that runs east-west, and has lots of springs that create bogs and streams. Just over a kilometer to the north of the foot of the hill, maybe a little farther, a giant swamp once made travel almost impassable. Between the hill and the swamp, and a stretch of low, marshy ground, was and is a bench a few hundred meters across made of sandy ground that was a settlement place and trade route. And it was there, in the autumn of AD 9, that Arminius and the Germanic tribesmen following him ambushed three Roman Legions and destroyed them almost to a man in a running battle that lasted almost three days. The Battle of the Teutoberg Forest, or the Varusschlacht. 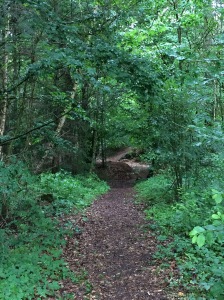 Someone lurked in the woods, watching, waiting, patient…

One of the highlights of the trip was visiting Kalkreise. Because German schools were still in session, and because no one in their right mind goes trampling battlefields in cold, wet, windy weather, it was not overrun with tourists. Also, the official summer museum season would not start for another two weeks. That’s when when the reenactors all come out to play and archaeologists give tours and there are summer camps and… yeah.

The museum is mostly in German, although there are translated materials available. It is in two major sections, plus the battlefield itself. The first part of the museum introduces you to Roman culture and what the Romans were doing in Germany, using artefacts, really neat life-sized paintings, and (for kids) costumes and props. You got a sense of Roman civilization and of how the Roman army worked, what Roman weapons were like, how night camps functioned, and so on.

Roman cavalry charging. The spear belongs to the Germanen just outside the shot. The rider wears the famous silver mask that was found at the battlefield. 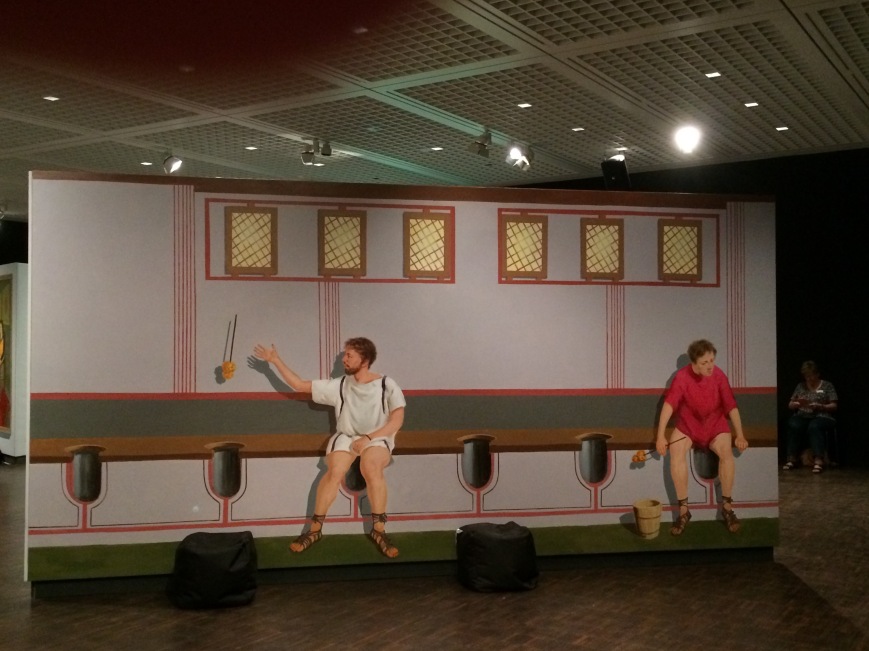 Privacy in the bathroom didn’t exist in Roman society. You went to the cloaca to do business as well as to take care of business. And to socialize.

The second part, the red, rusty tower thing that caused so much controversy when it was built, is about the battle and the archaeology that followed. I accidentally ended up doing the exhibits backwards, but since I’d read about the battle before and was familiar with the general archaeological history, it worked. It begins with a description and models of the peoples living in the area before Rome arrived, and samples of their artifacts. Then it moves to the Romans, with a large, well-done computer display showing how various Roman emperors and generals moved up the Rhine and into Germania. Next come the two antagonists, Varus the older Roman commander and administrator, and Arminius (Hermann) the Cheruski leader who had served as an auxiliary with the Roman army and had learned how the Romans fought.

And then the battle. This part is especially well done, using three-dimensional models, flowing ball-bearings to show how the Romans were channeled and trapped, and other things to walk the visitor through as much of the battle as archaeologists have been able to positively lock into place. The entire episode actually covered far more ground than just the infamous corridor between marsh and mountain, but it had probably disintegrated into individuals and small groups in a running fight for survival at that point. The last part of the display, which really does need either German fluency or a solid background in archaeological methodology to fully appreciate, is about the archaeology and investigations of the site. It is fantastic, and I could have spent way too much time going through each sub-display and drawer of bones and soil-studies, and topographic analyses, and LiDar and…

You can go up to the top overlook and survey the place, but it was raining pretty heavily and there are helpful signs saying “If you  go up in a thunderstorm, you go at your own risk.” Instead I opted for the semi-enclosed lower overlooks, which give you a general sense of terrain. Also in the overlooks are displays about how people looked at the events, once the Classical manuscripts that described the battle were rediscovered in the early Renaissance. Arminius starts as a Renaissance prince (don’t laugh), then begins looking suspiciously like Fredrick the Wise of Saxony, then dreadfully neo-Classical, then Wagnerian down to the horned helmet (see the Hermansdenkmal at Detmold), and then became a pure Aryan in the 1930s. Today he is back to being a Germanic tribal leader without any role in modern German political language.

By the time we finished the second part of the museum, the rain had let up, and it was time to go through the woods.

Do you hear birds? I don’t hear any birds.

There’s a nice nature trail, and also a semi-paved trail with metal plates that have the Latin (and German translations) of the Classical sources, including Tacitus. It leads through the woods to the edge of a clearing.

The open area is about a kilometer or so long and a hundred meters or so wide. It slopes from left to right in this image. You can see a little bit of metal plate in the lower foreground.

You can go through the woods into the central part of the battlefield, or through the meadow (the Roman Path). I ducked into the woods, and the person watching noted that I vanished about two meters in. Granted, I was wearing a black raincoat, but that gives you an idea of how thick the undergrowth can get and how dark it was under the trees. And the Cherusci and their allies were hiding behind a wall of turf and wattle.

A reconstruction of the wall. It was actually almost two meters high and half a meter thick, with a drainage trench behind to keep the runoff from the hill from undermining it too early. 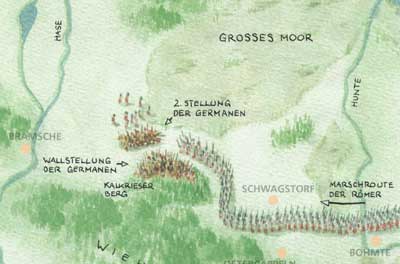 You can see the bottleneck that forced the Romans to string out.

When the fighting ended, three Legions had disappeared forever. Varus committed suicide. Perhaps a dozen or two dozen Romans survived to tell the tale, avoiding being sacrificed in the swamp along with many of their weapons, mules, armor, and other goods.

The site is creepy on a cold, grey day not unlike the days of the battle two thousand years ago. Something lurks in the woods. Something waits down the slope, watching. I felt uneasy, even as fascinated as I was by the archaeology and history and how the famous wall had been constructed.

When Romans returned in force three years or so later, the site was covered in bones, thousands and thousands of bones. The Romans gathered as many as they could find, human and otherwise, and buried them in pits. They did not venture into the swamp to look for remains there. Then they left. From that time forward the Romans did not attempt to establish a major long-term presence east of the Rhine and north of the Danube.

I highly recommend the museum and battlefield if you are interested in Roman history or battlefield history. http://www.kalkriese-varusschlacht.de/en/museum/

Being able to walk the site really helps explain how things played out, and the reconstructions and background info are superb. It is not aimed at large groups of non-German speakers, although there is a nice array of English-language materials in the museum shop, and you can get guides in English. Calling ahead for English-language tours is also available for a fee. I was hoping to find something humorous to take home, but no, and I didn’t inquire if they had anything available after looking around. The Germans take the battle seriously, in part because it really did shape how the German-speaking lands would develop over time.

But I would not want walk the battlefield on a wet, stormy night in autumn.

Books: I highly recommend Peter S. Wells The Battle that Stopped Rome. It was written on 2004 so it is a bit dated, but very readable and gives you excellent background into what things were like and how the battle may have played out.  The museum recommends Tony Clunn’s Quest for the Lost Roman Legions. I have not read that one. Clunn found the battlefield, and the book is about his search and what he found, as well as about the fight itself.

7 thoughts on “The Varusschlacht – A Dark and Bloody Ground”