There is theology ahead, and history, and a bit of personal philosophy. I am not Reformed and certainly not a theologian. Read at your own risk. The links take you to the documents mentioned, and to Calvinist discussions of the topic.

On Tuesday I mentioned the acronym T.U.L.I.P. It is shorthand for the foundational doctrines of the Synod of Dort and the Westminster Catechism.

And yes, it is a wink and nod to the Reformed churches of the Netherlands. 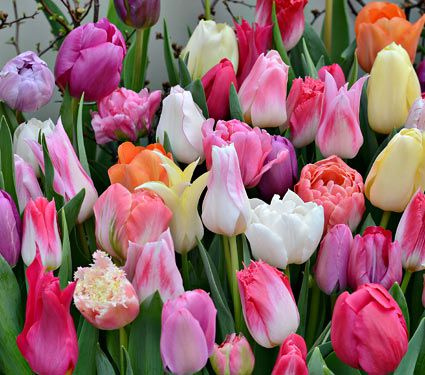 So, what is T.U.L.I.P.? Total depravity, unconditional election, limited atonement, irresistible grace, and perseverance of the saints.

Translated into a slightly longer version, they are  a statement of the basis of John Calvin’s (and some of Augustine of Hippo’s and some of Martin Luther’s) understanding of salvation and redemption. As the Reformed (Calvinist) churches were sorting out their theology and what absolutely could not be argued about, the Canons of Dort in 1618-19 developed a set of basic points, from which T.U.L.I.P derives.

Total Depravity – mankind is utterly fallen, totally corrupt and incapable of self-redemption because of Adam’s sin, which doomed all his descendants. We are “dead in sin” and cannot do anything good. We are less than worms in the eyes of G-d. [Total depravity makes perfect sense after you watch the international news, or deal with  two dozen toddlers who all want the same three toys.]

G-d, in His unimaginable mercy and love, for reasons no human can possibly comprehend because His ways are too mysterious for us to even begin to understand, has selected a few humans for salvation for His own reasons. We can do nothing, He has done all. [Here people start having difficulty, because if a few are Elected, then a lot are Reprobated, or not saved.]

Since only a few are Elect, Christ’s salvation comes only to the Elect, not to all. His death is infinitely powerful and saving, but G-d chose to Elect only some, not all, to salvation and redemption. [This is where a whole lot of people collide with Reformed theology, bounce, and head for other Protestant traditions.]

Those who are Elect are elect will be saved, no matter what. G-d will find a way to work His will. As someone put it, “It was as though I were pursued by the Hound of Heaven,” until he accepted Jesus and joined the faith. Such grace is irresistible. It may take a while to work, but the Elect will come to know their weakness and need for salvation, and will turn to G-d, confess their sins, and accept His mercy and love.

The Elect cannot fall away. “Neither height, nor depth,  . . . nor things present nor things to come can separate us from the love of G-d.” (Romans 8:38-39) During the 1500-1700s, it sometimes provided a grim sense of security: if everyone is out to get us, we must be doing something right, so we will hold fast to our beliefs. The Elect will be saved once G-d’s plan comes to fruition.

Now, I see a whole bunch of hands waving in protest. How can a just and loving deity (John 3:16) randomly pick some people to save and condemn the rest just because? What about “G-d is love?” What if someone refuses to accept salvation and chooses to do horrible things? What if you don’t believe in Original Sin? Where in the Bible does this come from, anyway? (Romans 8: 28-30 is a start, notably the King James and Geneva translations) For the latter, the monograph you want to read is “The Reformed Doctrine of Predestination” by Loraine Bottner. You can also get it on Amazon. I have a copy on my Kindle for when I teach Protestant history.

One very important thing to keep in mind is that if you go back to John Calvin’s writings, even he spent far less time on predestination and Election than on basic, how do you live a Godly life sorts of things. It is easy to get locked into worrying about “am I among the Elect? What if I’m not? Did calling my brother a moron mean that I’m among the reprobate?” and to forget that, per Augustine and Calvin and a lot of other theologians, we don’t know, we can’t know, and worrying may be a good sign but you are better off living the Scriptures than fretting over them. As St. Francis of Assisi put it, “Preach the Gospel to everyone you meet, and if you find it necessary, use words.”

Now for the history bit:

At the time of the first Congregationalist settlements in North America, the Canons of Dort had just finished meeting, and word was spreading through the Reformed churches (Presbyterian, Reformed, Congregational, Huguenot in France). A sincere Calvinist from the Rhineland, who was convinced that the end times were near and that the Holy Roman Emperor was the Antichrist, had just been invited to be king of Bohemia instead of the H.R.E., triggering the start of the conflagration that we today call the Thirty Years War. The Dutch, Reformed Protestant and otherwise, had been fighting the Spanish for fifty years, with another thirty to go. There was no separation of church and government, so what you believed affected what the government thought of you. If you disagreed with the theology of the Church of England, for example, it didn’t mean that you had a different sense of faith and personal belief. It meant that you were a traitor. Even within the Reformed (Calvinist) tradition, differences in understanding led to fighting and persecution.

The Separatists had become convinced that the End was Nigh, and they wanted to be well away from England when the Wrath of G-d struck the sinful land. And they didn’t want their children to grow up Dutch, because they had already fled to the Netherlands to avoid trouble in England. So the group living in Holland, plus other like-minded folk from East Anglia and the surrounding region, plus a few spares, obtained permission to settle in North America. Their goal was to be the City Set Upon a Hill (John Winthrop, and Matthew 5:14) so they would be ready to return to England and rebuild after the unGodly were destroyed/defeated/saw the error of their ways/the civil war ended. They did not anticipate the difficulties they’d face in North America, nor did they imagine England becoming temporarily a Godly Commonwealth under Oliver Cromwell (who was not entirely Puritanical, either). The Separatists envisioned a society where all followed the strictures of the church, all contributed to society according to their ability, and all participated in a Covenant between the people and the Most High. Magistrates and ministers saw to the bodily and spiritual disciplines and needs of the people.

That was the theory. In reality, well, humans are human, and after the first few generations, the World started intruding more and more. And the Commonwealth lured some back to England. Disagreements among the Separatists and between them and other Congregationalists didn’t make life easier, and that was when the French and Indians weren’t attacking. One major challenge came from the increasing number of men who would not, or felt they could not, become full church members. By the early 1700s, the descendants of the Separatists had shifted away from the old standards of T.U.L.I.P.

Today those five points have become the basis for calls for renewal and revival in a number of denominations, including some Southern Baptist congregations and the Presbyterian Church O.P.C..

For more, besides those linked in the post itself: Thuesen, Peter J. Predestination: The American Career of a Contentious Doctrine. Very readable, with a good introductory section about the background of the ideas of predestination. He brings it to the present day and the book The Purpose-Driven Life.

Ryken, Leland. Worldly Saints looks at the Puritans in context and was one of the first to do a social history of them.

Edmund S. Morgan’s Visible Saints is an older (1965) classic that focuses on how the Separatist experience in North America shaped their theology and society.

There’s another one I read for graduate seminar but the title and author are escaping me. Mark Knoll’s America’s God looks at American Civil Religion and has some good background into the mental world of the people of New England and the other colonies.

4 thoughts on “The Flowers That Bloom in the Spring (trala) have nothing to do with T.U.L.I.P.”