The autumnal waves of cool and cold fronts have begun sweeping down from the Dakotas, Alberta, and the Arctic. The plains warm up, then drop twenty degrees under grey clouds, then warm up again, but not as much. The grasses are changing color, starting to shift from green to a near infinite range of browns. A few cottonwoods are starting to turn as well, their bright green becoming fluttering, shimmering gold. And the birds are forming herds.

I beg to differ. Forty nine robins are a herd. And I counted them. They were swarming the school yard not far from Schloß Red one evening this past week. I stopped and counted. I got to 49 separate birds, with more coming in from various directions. That, my friends, is a herd. A swarm. A plethora. A superabundance. A lot.

On Thursday, one of those drippy gray days that make my first class doze, second period is quiet, and third period just wants to sleep. I was working and had the window blind pulled up a little. And heard meadowlarks, a bunch of meadowlarks. So I turned to look and eight of the beggars were stalking the grass behind the classroom. They were not as brightly colored as I’m used to seeing, and they seemed to be working together to flush creepies and crawlies out of the grass. 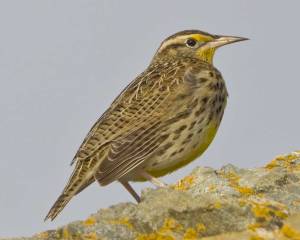 Like this, but wet and grumpy looking, and seven more. http://www.audubon.org

That noon, as I drove back toward town, I passed a playa with a gazillion ducks. All sitting pretty close to the road, just where I could stop and count and write down markings to identify the not-mallards, not-buffleheads. Alas, traffic would not let me stop and pull over. 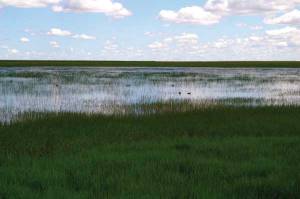 Make it several score of ducks, in shorter, clumpier grass, under a grey sky. Otherwise just like this. From: http://www.kgs.ku.edu/Publications/PIC/30gifs/fig7.jpg

I suspect the next major cold front will start sweeping the geese and even more ducks down the plains. Monarch butterflies have already invaded, and some of the summer visitors, like the killer hummingbird, have gone south already.

* I heard those giggles from the classic Muppet Show fans. 🙂