. “To make a prairie it takes a clover and one bee,—
One clover, and a bee,
And revery.
The revery alone will do
If bees are few.” (E. Dickinson)

And grasses, and forbs, and microbes, and herbivores, and fire, and . . .

If you ask most people what they think of when you say “prairie,” they will respond with grass. Except for the few who grin and say, “a little house.” But pretty much everyone associates prairies by definition with grasslands, and grasses of varying heights. Some people, if pressed, will describe a meadow with lush grasses and wildflowers. Others may recall the history book descriptions of grasses taller than the head of a man on horseback. But no one will mention trees, except in a negative sense, and few will talk about flowers or bushes.

There is a great deal of truth to the popular definition of prairie as a grassland. But the steppes of Eurasia and North America are also grasslands. And some boggy wetlands are grasslands, as are a few bits of ocean and lake floor that are covered in aquatic grasses. As you have guessed by now, there’s more to a prairie, and even the short-grass steppe, than just grasses.

Grasses are tall (or short) plants with narrow leaves and that do not have woody stems. They lack obvious flowers and are frequently wind pollinated. Domesticated grasses include Kentucky blue grasses, maize, wheats, barley, oats, and rice. The most easily recognizable wild grasses of the North American prairies are the tall grasses: big bluestem (aka turkey foot), Indian grass, little blue stem. They can grow up to six feet (2m) tall, thus the term “tall grass prairie” for the enormous swaths of Nebraska, Kansas, Iowa, Oklahoma, Minnesota, Wisconsin, Indiana, Illinois, and parts of Missouri and the eastern Dakotas once covered by these long, graceful plants. 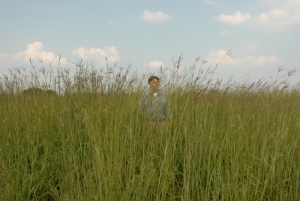 Below the tall grasses are mid-grasses, such as western wheat grass, little blue stem, and switchgrass. These grow about knee to waist-high, and tolerate drier climates than do the tall grasses. The 20″ rainfall line, or 100th Meridian, is roughly the border between the tall grass prairies and the western plains, which slope into the shortgrass steppe, where buffalo grass, grama grasses, and other drought-tolerant bunch grasses dominate. 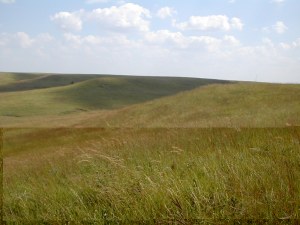 The Konza Prairie in the Flint Hills of east-central Kansas, probably in late summer. From TIEE. echoed. net

But the grasses cannot live without other species present, at least not well. The grasses are nitrogen takers and need legumes and other nitrogen-fixing plants to replenish the soil. These other plants are the forbs, the flowers and woody plants of the prairie, such as compass plant, lead plant, Indian paintbrush, yarrow, Echinacea, blazing star, rattlesnake master, sunflowers, D.Y.C.s (d-nm yellow compositae) and other non-grasses. They tend to be knee-high, fighting for sunlight in the shadow of the tall grasses and surging up in the spring, ahead of the grass shoots. Their roots return nitrogen and other elements to the soil, and provide some of the variety that makes the prairies well worth long, slow walks, looking past the grasses for the other residents.

Much of the life of the prairie is lived underground. Roots make up an enormous amount of the biomass, of the living stuff of the prairies and grasslands, and bacteria probably make up a majority of what is left over. Big blue stem can have roots up to 20 feet long. Long roots mean lots of water collecting ability, and good reserves for drought and cold. And because the tall grass prairies are pyrophilic, meaning they do best when burned occasionally, the big root systems mean that the plants have reserves for their big come back after the fire. Without fire, the prairie accumulates too much woody, dead stem-material and the greener, fresh growth is choked out and smothered. Burning tidies and cleans the prairies, returning carbon and nitrogen and other elements to the soil and letting sunlight reach the younger growth. A burned prairie after a few rains looks like the lushest, plushest green velvet. You get this urge to get out of the car, lean through the fence, and pet the stuff. 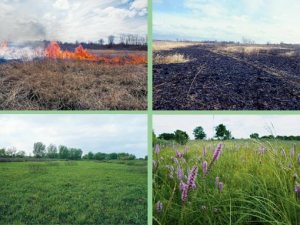 In fact, the North American prairies are a managed landscape. Without burning, sumac and other woody plants move in, followed by trees, and the forest reclaims the grasslands as far as the 20″ rainfall line and a little beyond. Staghorn sumac (below), one of the pioneer colonists, is lovely in the fall, and is good to make drinks from, but it’s not a grass.

American Indians burned the prairies to freshen them up and attract bison to the green shoots, for horse fodder, to deter their enemies, for the hell-of-it, and by accident. Today burning keeps the prairies healthy and encourages species diversity. It is also controversial. because the questions about how often to burn, whether grazing can replace burning, and what to do when houses creep into the prairie have yet to be answered. Kansas City MO has threatened to sue the State of Kansas for those days when the smoke from the spring burns trips the EPA air-quality sensors and KC-MO gets fined for Kansas smoke.

The tall grass prairies are considered an endangered ecosystem because the few remnants are small and often lack protection from development. Grasslands are not sexy, they are not mysterious (like the Everglades) or dramatic (the mountains, Grand Canyon), and can be dull when seen from the windshield of passing cars. But grasses form the basis of most humans diet, and the wild grasses have a quiet beauty as they sweep and bow in the wind, red-tipped after frost, silvery with hoarfrost or ice, or lush green in May as storms sweep down, flickering tongues of lightning and blue veils of rain washing the world clean for the grass that covers all.

James Sherow (ed). The Grasslands of the United States.

Paul Johnsgard Prairie Dog Empire: A Saga of the Shortgrass Prairie. (I have not read this yet, but non-technical books on the shortgrass are few.)

Jim Steiert and Wyman Meinzer Playas: Jewels of the Plains (About the playa lakes part of the shortgrass ecosystem. Beautiful pictures.)

2 thoughts on “To Make A Prairie . . .With Apologies to Emily Dickinson”